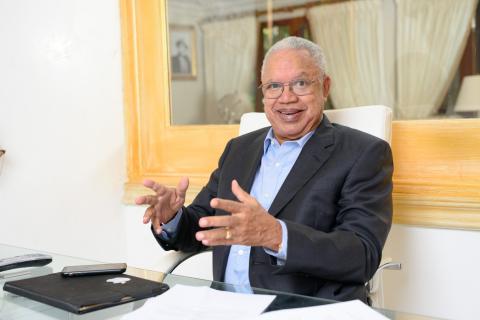 STARTING a technology-based business can sometimes seem like a daunting task — between finding capital, securing permits and finding the right staff many entrepreneurs get frustrated and often decide to throw in the towel.
But Douglas Halsall, chief executive officer of Advanced Integrated Systems (AIS), made the decision to venture into the computerised systems over three decades ago and hasn't looked back since.
Like many other entrepreneurs he said, "It was a process, it didn't take place overnight."

AIS is an information technology (IT) solutions company founded in 1987 in Jamaica. The company's core business is to create, implement and maintain innovative products and solutions primarily in health insurance claims and hospital information systems.

But the origin of AIS lies in the passion and determination of an ambitious Jamaican who was determined to make a substantial mark in corporate Jamaica.

"I saw my civil service uncles getting a pension, not necessarily living the way I would like to live at their age, so from then I realised that I'd have to think outside the box," said Halsall.

In the early days of his work life "thinking outside the box" involved working extra hours and going above and beyond in terms of the value he brought to his company.

"I went in the bank, I worked very hard, and I got rapid promotions. I always had the philosophy that nobody is going to fire somebody who delivers more value than they're paid so I got my job security out of being the best employee," he said.

At that time the business mogul was a bank teller in a local financial institution, with a recognisable knack for accounting.

He disclosed to the Jamaica Observer that this knack catapulted him in a few years to the position of data centre manager at NCR Corporation. NCR, which was previously known as National Cash Register, is an American software, consulting and technology company providing several professional services and electronic products.

He said that's exactly where he needed to be in order to start AIS at the right time.

"My accounting background with my computer knowledge propelled me to the top because the IBM guys could talk about what the computers could do, and no doubt they were brighter than me, but the people that were taking the decisions were accountants — and I could talk their language and I could design their systems. I realised that this thing called computer is going to play a major role in the lives of companies and people, especially accountants in the future," Halsall stated.
He further disclosed that after several other promotions and offers he decided to delve into his own business, bringing his ideas to the market.

"I realised that the thing was changing again. Whereas in the old paradigm you buy a computer from a manufacturer, you'd use the manufacturer's unique programming language therefore you were tied to that manufacturer. In coming to a stage called open systems I realise that being a computer manufacturer representative was not where it's gonna be at and with all the goodwill that I had in Jamaica at the time I decided to start my own company. AIS came from reading the future."

He continued: "You'd be surprised that a number of the people who I thought were my friends were not answering my calls because they figured I could never have given up a job like that with all the trappings that I had. But I realised that if I was going to take the plunge that would be the time to take it, so I started AIS."

But it was not a bed of roses. Halsall recounted some of the early challenges with establishing the now-multimillion-dollar company.

"It was going to be difficult. I had difficulty getting financing although I was wonder boy at NCR; one bank manager said, 'He will never make it on his own.' I was getting the runaround. Eventually a female who was lower down the ranks than a manager put her neck on the line and I had to give two houses to get a $2-million facility. I paid it back in two years and I've never borrowed money since — and we're now 35 years old. I see hurdles as opportunities," he shared.

Apart from that, the entrepreneur was forced to make some strategic business decisions.

"I realised that selling hardware and writing programmes was going to be a difficult way of sustaining growth in revenue and what you had which was coming were, in the first instance, packages for different types of industries, retail, manufacturing, banking etc. At first I realised that government was one you needed so my first package was in government, and once we understood government accounting we were geared to win the first major contract computerising government accounting and budgetary systems. Thereafter we realised yet a further truism, which is that though you can get big money from licence fees and maintenance we needed something more sustainable."

That's when the company delved into creating solutions for health insurance claims.

"When the National Health Fund (NHF) came we were the first in health insurance claims, so we got that. Today we have 100 per cent of the health insurance business in Jamaica. Because of that we implemented NIB in The Bahamas which, in 2011, won the computer world award," stated the AIS CEO.

Today the company is heavily involved in creating management and information systems for the health-care industry but AIS also dabbles in the financial technology space. For example, AIS was the first technology-based company to introduce ABM use to Jamaica by partnering with a local bank.

"I never thought that there was anything that was working anywhere else in the world that couldn't work in Jamaica but I must tell you that the evening after we commissioned the first ABM at NCB my friends laughed after me. They said 'Jamaicans would never understand ABMs so don't bother start to celebrate it.' " Halsall criticised, "I don't know that Jamaicans have the confidence that they need to have in their fellow Jamaicans on matters like these."

Looking ahead, the AIS CEO has plans to expand his reach and to go public.

"We're considering an IPO in the next two years. It's hard to keep it as a family business because that curtails expansion. We're now considering moving into Central America. We just appointed a partner in Costa Rica," he told the Business Observer.

With that said, the entrepreneur had this advice for budding IT business owners like himself.

"When you're putting in enterprise systems the critical thing is not how right your programmes are, it's change management because people [are] accustomed to the old ways of doing things and people naturally are afraid of change," he informed.